1
Out of the Closet and onto the Lab Table: Part 3
posted by TeamPeeta649

It had been three days after Spirit had almost दिया in to Stein’s advance on him and his दिल was still aching. He had wanted nothing और than to allow Stein to touch him, किस him, pleasure him, but he knew that it would only end in his दिल being broken again. He couldn’t expect Stein to commit to him. Who was he kidding? He knew Stein would commit to him. It was Spirit himself who couldn’t be expected to commit. He wanted to, but it he didn’t know how. He had never दिया all of his प्यार to one single person in all of his life. Yet when he thought of Stein, oh how his दिल beat. It pounded so hard he thought it would break from his chest.
Spirit sighed and got out of the closet; he couldn’t hide there forever. “Please let me get through this hallway.” He took a deep breath and hurried down the hall, heading for the school doors. He made it outside and breathed a sigh of relief. He put his hands in his pockets and walked home. He smiled as he walked into the door and saw Maka sitting at the table. “There’s my girl!”
“Leave me alone, Death Scythe.”
Spirit dropped to the floor and burst into tears because of her cold shoulder. Over the sounds of his carrying out came a knock on the door.
“It’s probably Soul. I’ll get it.” Maka got up and walked to the door, opening it slightly. Her face froze in surprise at the visitor. “What?”

Because of his crying and wailing Spirit only heard the sound of muffled voices at the door; he didn’t hear the words of the brief conversation. He continued to cry and didn’t notice the heavy footsteps that had moved across the house and stopped close beside him. When Spirit finally felt the presence of someone standing near him he lifted his eyes and peered at the man standing in his home. His mouth dropped and his eyes nearly popped out of his head. I can’t believe it! What is Stein doing in my house?!
Stein stared down at his through his glasses as he turned the bolt in his head. “No need to cry anymore, Spirit. I’m here now.”
Soul walked up to the open door. “Come on, Maka.”
“Bye, Death Scythe. Bye, Stein.”
Stein turned to the door. “Good bye, Maka.”
“No! Maka! Don’t leave me here alone with him!” Spirit ran towards her.
“Let’s go, Soul.” Maka stepped outside and closed the door behind her, causing Spirit to slam into it.
“What’s wrong with your dad?” Soul asked Maka as they walked down the stairs.
“I have no clue. Maybe Stein can operate on him and try to fix him while we’re gone. And please don’t refer to him as my dad.” Maka and Soul walked away from the house, not expecting any legitimate reason behind Spirit’s strange behavior. 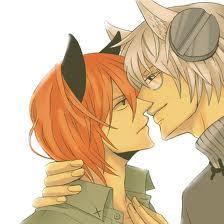 peeledpotato likes this
4
एल and light afterhours
posted by mcluvin

"light-kuuun" misa voice rung out और irratating than ever, lights stern face ignored her pleas "if your bored than leave" light coldly said
L felt the blood rushing to his head, though एल didn't think it was right he couldn't help but प्यार the way he so strongly कहा it, एल looked at him in admiration misa looked at him angrily "LLLLL your so annoying" Light cocked his head at एल and एल prepared himself for light to सेकंड it but he looked at एल like he wanted to protect him than he whipped his head at misa, she smiled and sqeauled "finally your paying attentio-" "SHUT UP MISA" his mouth grinded...
continue reading...

Warning: Contains some mild yaoi. It's not hardcore, but it's descriptive.
Note: पढ़ना the lyrics to the song is not required, but I felt that the song went very well with this whole part of the story

Maka grabbed the key to the handcuffs off of the floor and scooted over closer to Kid and Crona. “I think you’re on good enough terms to be let go…”
Crona blushed and looked away from everyone else. Ragunarok smacked his meister on the head repeatedly while yelling at him, “What’s wrong with you?! Laying there and taking that sort of thing?! I’m...
continue reading...
Broken, chapter 1
posted by Silver_Neko
Sing to me songs of the darkness…
Farewell to heaven, my friend.
Come to me, bury your sorrow…
Temptation await the condemned.
Crona woke with a gasp. He had had a certain song stuck in his head for a week, now, and he didn’t know what to do. Somehow it suited him, though. A lot of depressing songs did. The demon swordsman looked up out of the little window in his room at the DWMA. Light shone down into his room, but missed Crona altogether, making him feel dreary.
“Ugh…” Crona mumbled as he got up out of bed. He looked out the window again....
continue reading...
He Could Be The One
posted by RikuObsesser
Chrisko had a hard time making फ्रेंड्स at his new school.He moved to Choshi,Japan from Georgia in the United States.
He had learned Japanese द्वारा the time he moved to जापान so he had no problem speaking to the locals.He was just very shy and so
was unable to make friends.When he entered class he of course introduced himself to the class in a polite tone of voice and bowed
to the class before taking his सीट अगला to a guy who was studying for an up-coming test.He was handsome but he looked like he
worked himself way too hard."Okay class,"began the teacher."We are having a test on the history of Japan."...
continue reading...
1
इनुयाशा and miroku ~ याओइ 2
posted by mcluvin
इनुयाशा felt nails urgently pulling him closer, rapid and desperate rolling hips caused him to shudder, exhaling Miroku's name. Miroku felt himself go completely insane at that moment. Feeling a jolt of heat run from his lower back into his cock he came onto the bare chest of the half demon before his own whimper followed इनुयाशा filled him, again barely whispering his name in ecstacy. Resting his head into miroku's glistening sweaty neck Miroku managed to moan

"Well... I'm definatly not going to have the energy to repair anything anymore"