Tigerstar's Revenge, Chapter 7, Part 2
posted by ttmrktmnrfn0830
...I stared with curiosity. "What's that?" I leaped for the dog fur.

I already hooked it with my claw and chased it around the nursery. "Look! I'm Thistleclaw, attacking that mangy dog!"

"Keep your voice down!" Snowfur shushed me.

I pinned the dog फर down. "I hate the nursery! It's too full of kits. I'm never allowed to play anymore. I should be in the apprentices' मांद, डेन with Lionpaw. I bet he doesn't have to take afternoon naps."

"Maybe not," Bluefur purred, "but he wishes he could."

Snowfur puffed. "You've woken him up!"

"Play what?" Whitekit looked around.

"My new game; it's called 'Kill the Dog.'" I flung the dog फर over his head. Whitekit scrabbled out of the nest. We both flung the फर around the nursery. Pinning it down, we pretended to swipe a dog. "Take that!" I yowled.

Bluefur then called to Whitekit. "You'll be okay if Snowfur comes for a walk with me, won't you?"

"Of course," Whitekit yowled without glancing back. "Come on, Tigerkit!"

Even though my mother कहा no, after Bluefur and Snowfur left, Whitekit and I played Kill the Dog outside the nursery.

"I thought Leopardfoot कहा आप had to stay in the nursery!" Whitekit squeaked.

"Kill the Dog!" Frostkit and Brindlekit came out of the nursery. "Can we play?"

"She wasn't there!" I retorted.

"Well, everyone else was taken!" she replied.

"Come on!" Whitekit meowed. "Let's play, before my mom comes back and makes me take a nap!"

Brindlekit pinned the dog फर down. "You'll never get passed me!"

Whitekit and Frostkit were volleying the फर up after I hooked it up again. When it finally landed down, we all piled on चोटी, शीर्ष of it, trying to get it first. When we spread out, the tuft of फर disintigrated. We all groaned in dismay.

I felt very dizzy with exhaustion. Yawning heavily, I went towards my mother's nest.

"I told आप you'd be tired and grumpy," Leopardfoot sighed, handing me some bits of mouse.

I nibbled a couple of bites, laying down, my eyes heavy. I didn't have the energy to eat. Every kit was now in the nursery, playing around. I was on the brink of sleep, until...

I jerked up my head, noticing the desperation and sadness in her voice.

"You're back!" Whitekit bounded to his aunt. Then he took glances behind her. That was when I noticed the absence of his mother.

Leopardfoot gasped behind me. "Oh, no."

Robinwing looked sorrowfully at my mother, as if the queens both knew something Bluefur knew, and Whitekit didn't.

Bluefur took a deep breath. "Come outside, little one." I could tell that she was trying to stay calm.

"Has Snowfur got a present for me?" he squeaked.

What's going on? I bounded up to Whitekit. "Can I come, too?"

"Just Whitekit," she told me.

"Okay." I sighed, looking down at my paws.

"What is it?" he squeaked as he left. "Where's Snowfur? I she playing hide-and-seek?"

I turned to the other queens. I saw my mother wiping tears in her eyes with her tail. Robinwing got up, sniffling.

That was when I heard Bluefur yowling at Whitekit. "She's dead, Whitekit! आप won't see her anymore. आप won't smell her या hear her या feel her फर अगला to yours ever again!"

Robinwing came out and I stuck my face through the tunnel, to see what was happening. In the background, I saw Snowfur, cold looking and bloody, her eyes dull. Whitekit was फ्रोज़न with sadness, his eyes filled with sorrow and anger. Bluefur was hiding her face from her sister's body.

Whitekit spat at Robinwing, fury for his dead mother in his amber eyes. "I don't want your दूध या your nest! I want Snowfur!"

I watched in sorrow, as Whitekit galloped towards Snowfur's cold body. "I'll live out here, with you," he choked, pressing his nose to her fur. I got out of my place and went to my friend's side. He was choked with emotion, tears streaming in his eyes.

I gave a comforting lick to Whitekit's ear. The young kit looked up at me.

I shook my head. "It's not your fault. It could've been any cat."

"But why?" he cried. "Snowfur was a good cat!" He laid down, wailing with pure grief.

When a kit wails with grief, it's the saddest sound youi'll ever hear. When a very important kin, mainly its mother, is gone from its life, it has nothing to do, but wail. All of their sadness and anger is coming out from its cries. It's like a song of pure sorrow.

Every cat gathered around to grieve for the young queen, sharing Whitekit's distress as they cried out with sorry. Thistleclaw, Whitekit, and Bluefur cried the loudest, drowning out everyone else. I cried, too, even though it seemed like I made no sound. ...

Chapter 8 coming soon!!!
ttmrktmnrfn0830 When I was writing this to one of my frieds, I was listening to Tourniquet by Evanescence and I almost cried as I wrote. I hated writing about Snowfur and Whitekit wailing with grief, but it was in the story line and I had no choice. RIP, SNOWFUR!!!
Tigerstar's Revenge, Chapter 7, Part 1
posted by ttmrktmnrfn0830
A HALF-MOON LATER, ROBINWING HAD HER two daughters: Frostkit and Brindlekit. There were now four kits in the nursery, and it was getting too crowded; with all the queens, and the fathers and the families and फ्रेंड्स that visit. Bluefur came to visit a दिन after Robinwing's kits were born.

"Wow," Bluefur maneuvered around the chaos. "It's so busy!"

"The nursery hasn't been this full since we were kits," Snowfur agreed.

"It's too busy," I interrupted. "There's no room for proper games now!"

TWO MOONS HAD PAST SINCE MISTKIT AND NIGHTKIT'S deaths, and Leopardfoot was still stung with grief. That doing will always be in my head, and I'll never forget my sisters.

I hurried out of the elders' den, Stonepelt at my tail. When I leapt in the nursery, he growled. "Leopardfoot!"

Leopardfoot got out of the nursery at the sound of his voice. "What is it, Stonepelt?"

Stonepelt was hot with fury. "Your son, here, put burrs in my bedding! See?" He turned around, his back covered in burrs. I chuckled, admiring the reaction...
continue reading...
Tigerstar's Revenge, Chapter 4
posted by ttmrktmnrfn0830
I THINK I HAVE FAILED TO MENTION that I was the nosiest kit ThunderClan had ever seen. Well, at that time, when I saw something interesting, I would blurt it out. I've proved that when, one day, Snowfur and Thistleclaw had a scandallous conversation (in my opinion). I swear, I was nosier than the notorious elders!

It was a quarter moon after Pinestar left, and Leopardfoot कहा that I could go in the clearing. I saw Snowfur come out of the medicine cat's den. She sighed deeply, and her eyes glowed. Thistleclaw ran over to her.

"What is it?" Thistleclaw mewed.

"We need to talk..." Snowfur looked...
continue reading...
Tigerstar's Revenge, Chapter 3
posted by ttmrktmnrfn0830
THE PATROL CAME BACK AROUND SUNSET, and things looked like it wasn't fun.
"There was a RiverClan patrol at Sunningrocks!" Sunfall exclaimed. "We drove them off."
I stared, absentmindedly, adoring the warriors' battle scars.
"Where's Pinestar?" Leopardfoot's panicked mew got me to my senses.
*Where is Pinestar?* He was never at the camp, and he hardly sees us.
"Can I go outside?" I asked Leopardfoot.
She nodded. "But don't go to far."
I leapt out of the nursery. The warriors that were on patrol were wounded. I observed Featherwhisker, as he tended everyone's wounds. Right then, he was taking...
continue reading...
Tigerstar's Revenge, Chapter 2
posted by ttmrktmnrfn0830
NOT EVEN A QUARTER MOON WENT BY, and द्वारा now, we knew almost everyone in the Clan. One day, a small, pale ginger she-cat walked in.
"Hello, Goldenpaw," Leopardfoot greeted the she-cat.
"Hi, Leopardfoot," the she-cat--Goldenpaw--mewed. "I'm here to change the bedding." Leopardfoot scooted us up. Nightkit drowsily got up, since she was finishing her nap. While I leaped up from the nest, my sisters slowly walked behind. I had grown stronger and improved well, as Featherwhisker had said. I gave a questioning look.
"How is it, being a warrior?" I asked Goldenpaw.
Leopardfoot purred. "She's not a...
continue reading...
Tigerstar's Revenge, Chapter 1, Part 2
posted by ttmrktmnrfn0830
..."Tigerkit! Tigerkit!" I felt one of my sisters nudging me awake. "Wake up! Open your eyes! It's beautiful out here!"
"Come on, Tigerkit!" my other sister squeaked. "Just open them!"
I then drowsily opened my eyes. Everything was so big! I turned to face my two sisters. One was a pale gray and the other was night black. I turned to face a larger she-cat, whose फर was raven black, except for a small scar on her flank that seemed noticeable from unevenly grown fur.
"You've opened your eyes!" the she-cat whispered. "Pinestar will be pleased."
I was guessing that she was Leopardfoot, my mother....
continue reading...
Tigerstar's Revenge, Chapter 1, Part 1
posted by ttmrktmnrfn0830 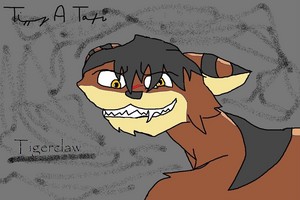 This story goes back to the time when Tigerstar was a kit...


THERE WAS SO MANY सवालों I WANTED to ask. *Why can't I open my eyes? Why can't I speak? Why do I feel so weak? Where am I? What are all these scents?* But, for some reason, I couldn't even mew.
"So," I head a tom mew, "what are आप going to name them?"
*What's a name?*
A she-cat then rasped, "The two she-kits will be called Mistkit and Nightkit."
"Lovely names, Leopardfoot," the tom praised. "What about the tom?"
"The tom?" the she-cat--Leopardfoot--rasped, "I think I'll call him...Tigerkit."
Then, Leopardfoot's tongue licked between...
continue reading...
Bullets, Creed, Lyrics
posted by ttmrktmnrfn0830 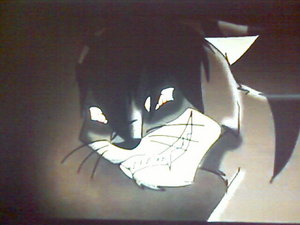 I heard this song द्वारा Creed, that sounds really good for Tigerstar, later on in his life.

I feel forces all around me,
Come on raise your head.
Those who hide behind the shadows,
Live with all that's dead.