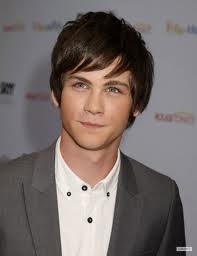 Nico's birthday is (while undecided) Rick Riordan stated to be January 28th, 1924 (however that would make him nineteen at his mother's death not ten)

June 5, 1964 - Rick Riordan, लेखक of the Percy Jackson & the Olympians and the हीरोस of Olympus series, is born.
June 5, 1976 - Grover Underwood is born, the nephew of Ferdinand
June 14, 2005 - Perseus Jackson...
continue reading...
7
The Mark of Athena-- Conspiracy Theories
posted by universalpowa 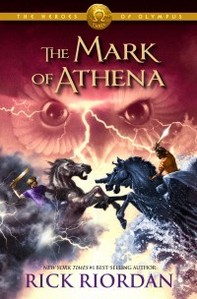 Heyoooo! So what’s this? :O Ricky already released the sneak peek chapter? Percabeth reunion? Answer to first: Yes. Answer to second: No.
Yeah, I was pretty upset about the whole -No-Percabeth-reunion-Rick-how-could-you-I-am-so-mad-at-you-and-want-to-read-that-book-so-flippin’-bad thing. Oh well. Rick loves to troll us.

So yeah, I’m totally psyched and pumped for this book...I mean, really. This one is supposedly “Rick’s favorite” as he कहा on the HoO Disney/Hyperion website.

So, looking at the cover, all I can think is OMG BLACKJACK IS BACK! Yeah that’s me...
continue reading...
3
Reyna, Piper and Jason
posted by xharrypotterx
Well Really, I don't like Piper much and despised Reyna in the beginning. So much that I actually preferred Piper. I'm still not done with the book but i just wanted to give a quick opinion.
I think Reyna is one of the best female characters in the Camp-Half Blood series. And i realized, I haven't really had a fave female besides maybe Thalia. And now one is Reyna for sure.
I think some of आप who are older on this spot may remember that लेख i wrote on Piper.
Well now I think I have a way to make my opinion even clearer. The kind of people I would get along with would be people like Reyna,...
continue reading...
3
The Son of Neptune (Fanfiction)
posted by Reyna_Praetor12
This is just the regular,you know,I'm crazy about HOO,and this is my first fanfic.Please review!

Theory 1:
Jason has been to one of the different camps before. Coach Hedge कहा something like, "I've never seen आप before in my life." Think about it, the mist, maybe? He may not know it, but he's tricking everyone into thinking he's always been there. This might be one of my stronger theories, because Hedge did mention that he was probably good with the mist because he's never seen him and Piper is his girlfriend and Leo is his bestfriend, though he has no memory of them.

Theory 2:
Percy...
continue reading...
6
HOUSE OF HADES प्रशंसक FIC
posted by ALN07
I did nt write this but found it and im reposting it ENJOY

As long as we're together…

They were still together, but for how long, Percy didn't know.

Percy's free hand grappled at the air, while his other hand clung to Annabeth's sweaty, pale hand, as the world around him got darker and darker, and the light above them, marking his friend's silhouettes got smaller until it was only a tiny pin point, and then it was gone.

A feeling of freefall was not a new to him. But the feeling of freefalling into Tartarus, the endless cesspool of evil, was entirely new. Percy wasn't one of those daredevils...
continue reading...
5
Demigods read The लॉस्ट Hero
posted by PixyStar436
So, hey!

PixyStar436 here and please टिप्पणी दे on this! This my first fanfic!

By the way, Jason and some Camp Jupiter peeps are in Camp Half-Blood.

All the characters belong to Rick Riordan!

It was just another boring दिन in Camp Half-Blood. थलाया was busy shooting down pigeons. Jason and Percy were busy sparring. Annabeth was busy screaming and running away from a spider. Nico was busy stepping on the spider. Piper, Leo, Frank and Hazel were busy making fun of Octavian. AND Reyna and Clarisse were busy sparring, also.

All it took to change the course of a normal day...
continue reading...
10
The Official Whole First Chapter of the Mark of Athena
posted by Phoenix_Stone 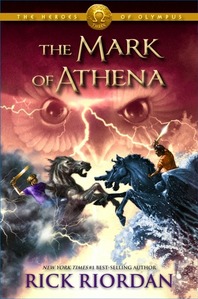 Official Cover of Mark of athena
Hi guys!!!! :D
I hope आप are well!!!! :D
I have just typed up the whole First Chapter of The Mark of Athena, which was released on the डिज़्नी website द्वारा Rick Riordan on Friday!!! Enjoy!!!! :D

Disclaimer: ALL RIGHTS TO RICK RIORDAN!!!

Until she met the exploding statue, Annabeth thought she was prepared for anything. She'd paced the deck of their flying warship, the Argo II, checking and double-checking the ballistae to make sure they were locked down. She confirmed that the white "We come in peace" flag was flying from the mast. She reviewed the plan with the rest of the crew--and the...
continue reading...
7
Percabeth Reunion
posted by penguin098
So, this is a different take on the long awaited percabeth reunion coming up in "The Mark of Athena" I thought it was fun to wite and I hope आप guys like it...

“Mumee? Would आप tell me a story?”
The child’s mother sat on her bed, and the girl’s shoulders slumped. The stormy grey eyes she looked into seemed to be calculating an escape route. That was the thing about Sally’s mother. She was always worrying, and she never gave two bedtime stories. ‘Wise girl’ Sally thought ‘Daddy says mommy likes to be called wise girl.’
“Please wise girl?” Sally tried imitating her father’s...
continue reading...
You Might Also Like...

The हीरोस of Olympus fanfic

The हीरोस of Roma
5
Who is Sammy Valdez? Who is Leo Valdez, really?
posted by ApolloGraecus
My friend and I had some theories about who Sammy Valdez, the boy from Hazel's past is, and what his relationship to Leo is. There must be one, because they look EXACTLY THE SAME! We had a few theories:

Pros: We learn from Gaea that Sammy moved to Texas, and Leo was...
continue reading...
8
The Origin and Meanings of PJO Names
posted by hisblueeyes
Got this idea one बिना सोचे समझे day. Please टिप्पणी दे and tell me what आप think! 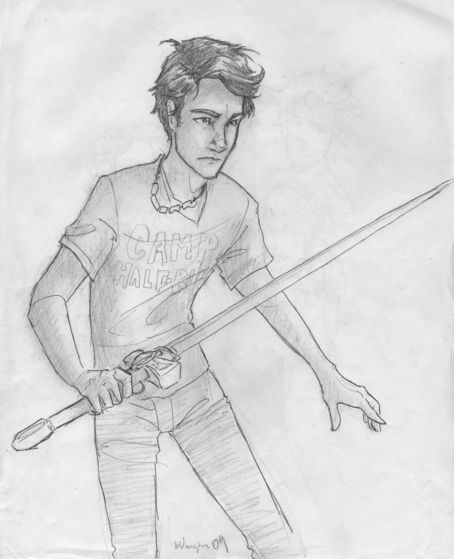 Percy Jackson
The name Percy originated in France. It means "piercing the valley" which also can mean fighting the lower side, the evil side, to reach justice. Jackson means "son of Jack". I know, I don't get it either. 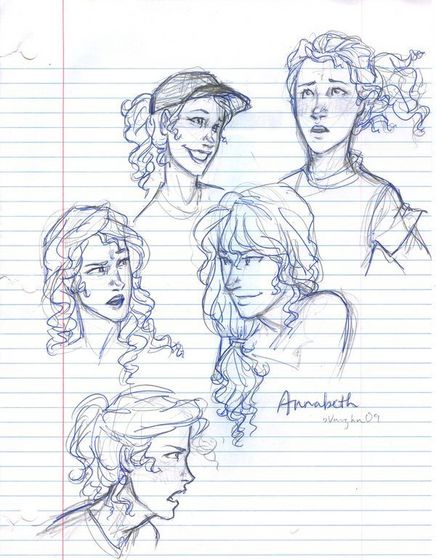 
OK! First off, I'd just like to begin with a HUGE spoiler! I will have had to wait 2 and a half years (including TLH sample chapters)to see Percy...
continue reading...
5
The Picture Perfect Puzzle
posted by HecateA 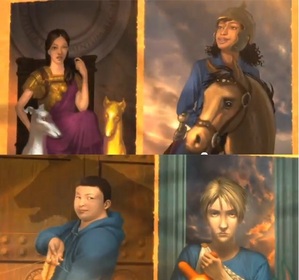 So I get a computer to check on this spot during my road trip and the character art video dared to come out while I was gone. Hmmph! Well, I always कहा it would.

So I got out my pen and sacrificed 2 pages in the middle of my notebook and wrote down what I saw in each picture, and my selective memory selected to remember the important things (for exaple; my name *cough*beat that Percy and Jason*cough*). Of course not, I mean what striked me about the characters. And as I did my research- it all unveiled into a picture perfect puzzle- which equals about 30 Kodak moments.


Guy on the left 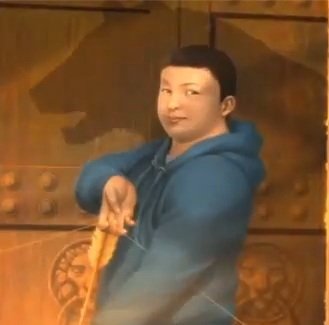 ...
continue reading...
4
Jason kisses Piper
posted by percyjackson234
Jason and Piper were द्वारा the fire. Piper looked deep into Jason's eyes. How did he look so good after going through soooo much? She doubted she looked as good. While she was thinking, she didnt even notice Jason inching आगे until his lips were on hers. Her दिल was thumping so loudly she could barely contain it. She leaned in further but Jason pulled away. "I remembered last night." he said. Giddily, Piper asked, "Remembered what?" He sighed and replied, "That Reyna's my girlfriend." She had planned the talk in jer head where Jason told her he had a girlfriend, but now she had no words. She looked away. "But Pipes I'm not the same man. I'm changed. And now I don't प्यार Reyna, I प्यार you. I प्यार the way आप look after a fight and I प्यार your braids. I प्यार the way आप always lean towards me and inch closer to me. I प्यार you." Piper smiled and whispered, "Reyna who?"
5
The Son of Neptune - Chapters 1 and 2
posted by SeaweedBrain101
Absolutely all rights to Rick Riordan! Everything is his! And seriously, buy the book. You’d be crazy if आप don’t. It is soooo AWESOME! :D

The snake-haired ladies were starting to annoy Percy.

They should have died three days पूर्व when he dropped a टोकरा of bowling balls on them at the Napa Bargain Mart. They should have died two days पूर्व when he ran over them with a police car in Martinez. They definitely should have died this morning when he cut off their heads in Tilden Park.
No matter how many times Percy killed them and watched them crumble to powder, they just kept re-forming...
continue reading...
6
Percy and Annabeth's Reunion
posted by GreekRULES515
Annabeth strode off the ship, stepping nervously onto the gorund. Annabeth didn't know if Percy had remembered her या not. What if he met someone else, after all it has been 8 months, she thought worried. She felt Jason stand beside her he was tapping his foot anxiously.
Annabeth scanned the crowd looking for messy black hair, and green eyes. She saw nothing but Romans. Then as if the crowd knew who Annabeth was looking for the Romans stood apart, making a pathway for two people.
The two people were in dark purple togas, they walked slowly as if in slow motion. Finally, after 8 months Annabeth...
continue reading...
12
पुस्तकें and Half-bloods: Fanfiction
posted by HecateA 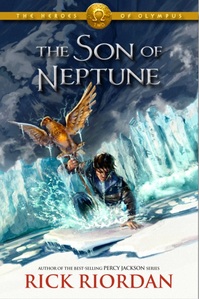 Title: पुस्तकें and Half-Bloods
Rating: C (the characters snap at each other and have goes, but not much)
Type: Adventure, hopefully humour, a bit of romance…
Characters: Piper McLean, Jason and थलाया Grace, Leo Valdez, Annabeth Chase, Connor and Travis Stoll, Chiron, Grover Underwood, Tyson and Clovis
Synopsis: What happens when the PJO characters get only a brief synopsis of the Son of Neptune and during the scramble for more, find out how much they can actually find a bizzare way of keeping connected?
Disclaimer: If I was RR these guys would be पढ़ना the whole thing, not chapter 1.
A/N: To...
continue reading...
8
What have I done? A Piper One-Shot
posted by Emily_is_COOl
What have I done?
A Piper One-Shot

Piper was devastated when Jason told her what had happened.
"Piper," he कहा meekly, almost afraid to be heard. "We need to talk."
When she heard this she had to almost stop herself from running away, she knew this couldn't be good.
Jason grabbed Piper's hand and pulled her closer, now they were in talking distance, not an arms length apart. Jason been trying to keep her away since the quest, almost pushing her back. What was going on with him?
"It's about my...old life." Jason कहा the words like he was sad to be in a place like Camp Half-Blood. Did the memories...
continue reading...
Annabeth's Death
posted by olympianglory
Percy,

He ran back to the Argo II, afraid and hopeful at the same time, just in time to see Piper and Hazel dragging Annabeth's lifeless body across the घास " NO! He yelled!", he cradled her cool head, the one that never again would spout बिना सोचे समझे facts he didnt want. He knelt, distraught. Slowly, everyone left. He would'nt. His only though was Annabeth. After a few hours, Nico came." Percy, I know this is tough, but if she is gone, she cant come back." He thought." Can आप get to her as a ghost?"
Nico shrugged " I suppose, but its late Percy, tomorrow."
More Cards
1234567891011