Heat
posted by COFblaze
Sonic shivered madly. It seemed to be the only thing he could do at this time. He wrapped his arms around himself, and his teeth chattered together. He scrunched his eyes closed, and bowed his head, trying to get the cold breeze away. He was freezing, and had never been so cold before.

But, that wasn't the worst of it. He was also injured. And, his injury was quite a deep one, too. It was snowing madly, and he felt incredibly vulnerable. Sonic let a tear escape his eye, as his leg throbbed with his deep injury. Blood had spilt onto the cold ground, and being in a cave wasn't much for shelter. He needed warmth. Quickly. And, his injury was becoming infected.

Sonic breathed out, white smoke coming out of his lips. His ears perked up a little, and he rose his head to hear footsteps. Sonic could not move, द्वारा being so cold and injured.

Something warm touched him, but it wasn't enough to keep him away from the cold. He soon realised this was a warm hand, too warm to be normal, especially in this weather. The warm hand stroked his cheek, gently, and he relaxed a little. The warm hand then trailed down his neck, down to his abdomen. Then, the hand slid back up to his face.

Another too-warm hand came to his face, and he felt his head boil up. It felt good, and he was relaxed. One of the hands then went down to his injury. He flinched a little when the warm hand touched his cut.

She then placed her warm lips on his cheek, sending a warm rush over him. Her arms then came up to his shoulders, and slowly behind his back. He removed his hands, and placed them around her. His arms warmed up quickly, yet his injury still throbbed.

However, the arms were removed from him, and they trailed down to his injured leg. She stroked his leg for a few short seconds, then to his dismay she moved away. But, before और cold breeze could hit him, the warmth blocked it again. He had his eyes closed, and one of his hands was searching for the स्रोत of the warmth.

He felt warm breath up to his ear, and a pleasant, soothing voice whispered, "Why do आप do it? People do care about you, too."

He कहा nothing, yet let out a trembling breath. Two warm hands touched his shoulders again, and then he was embraced. The warmth was unexplainable. But, oh, it felt so good. Sonic wrapped his arms around her, eyes still closed.

He received no answer, and could only hear the sound of the weather. He regretted going out to such a dangerous place. However, she was with him. He was safe. He knew who she was, despite asking.

He finally opened his eyes slightly, but his vision was slightly blurry. He couldn't see anything, if honest. He closed his eyes, and felt warm lips press against his. Warmth collided into him, and he wanted to stay like this. However, she removed herself from him.

"I've always wanted आप like this..." he murmured to her.

"I know," she whispered back.

She massaged his injured leg with her warm hand, and he felt soothed द्वारा it. Her lips pressed against his cheek again, bringing another heat wave through him. Sonic thought he was going to sweat द्वारा the heat, but he preferred this द्वारा far than the cold. The warm hand was removed from his leg, and placed just below his neck, like the other.

Sonic leaned in closer to her, hoping for another kiss. Her heat was magnificent, and he could hold her all day. His injury had died down, and he thought he could fall to sleep right now.

He was laid down, gently, and he kept his eyes closed. The heat stayed with him, all the time. It never went. Never.

"Thank you..." he murmured, "... Blaze."
Vela-Nova It was good but I felt really uncomfortable reading it.
gain7_gun hell that was good.
SoNaZe4eVeR great story :) is my favorite of all histories that I read

Sonic and Blaze- The Last Night
added by blazeroxs
a video for sonaze fans. Song द्वारा Skillet, The Last Night (my fav. band)
video
sonic
blaze
couple
Before Arguing about what?
posted by blazeroxs
“Stupid Sonic… Blaze… going out… jerk face.” Amy mumbled to herself while walking around. “What’s wrong with me, Sonic? I’m I too pretty for you?” she yelled, though no one paying attention to her. She then heard running foot steps behind her and turned around to see Sonic there.
“Someone called?” he कहा pointing at himself.
Amy कहा nothing, but glared at him with her ‘what-do-you-think’ look. “Why?!” she yelled.
“Why what?”
“Don’t play stupid with me, Sonic.” Amy कहा folding her arms, “I know about आप and Blaze. Why her? What’s wrong with me?”...
continue reading... 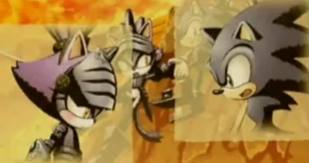