3
Shinichi xRan accosted (It's only a story)
posted by Kokuha 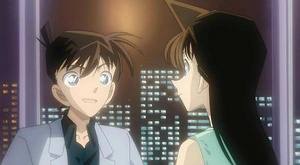 When Shinichi invited her out for a romantic dinner, Ran was delighted—until she found out he wanted to take her to the restaurant at the चोटी, शीर्ष of the sky-scraper, where they had gone once before, when he had run off to solve a mystery on an elevator…and never returned. Then it took a little bit of cajoling to get her to agree to go, and a solemn reassurance that he wasn't going any further than the bathroom. And if he didn't come back, she had full permission to kill him या beat him या whatever punishment she felt was suitable.

Needless to say, Shinichi was not planning on running off.

Once...
continue reading...
1
Who is Ran Mouri?
posted by Tinycupid-sama
Ran Mouri is the सेकंड Protagonist of Detective Conan. She is in her सेकंड साल of Tienten High School. Since she was little she had feelings for Shinichi Kudo, but it wasn't until the accident in America that she found out that she loved him(in a way she accepted it).Her प्रिय color is red, she can knit, and knows how to cook well. She is the captain of her school's karate club and can play the piano. Ran Mouri is the daughter of Kogouro Mouri(the "ex-police inspecter" and becuase of Shinichi is also known as "Sleeping Meneintei") and Eri Kisaki(the "Queen of Lawers"). Now she patiently waits for Shinichi's return not knowing that little Conan Edogawa is him.
2
Detective Conan Quarter of Silence
posted by sundaelala 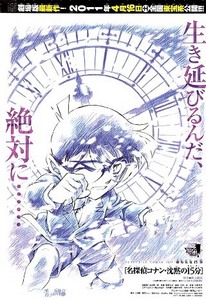 हे guys! It was confirmed that the Detective Conan movie 15, titled "Quarter of Silence" is to be released on April 16, 2011.

आप can visit the Official Website: link
It was updated already for Movie 15.

I found some posters too but I don't know what they mean because they're in Japanese. So, if anybody could read it, I hope आप can share it with us :D 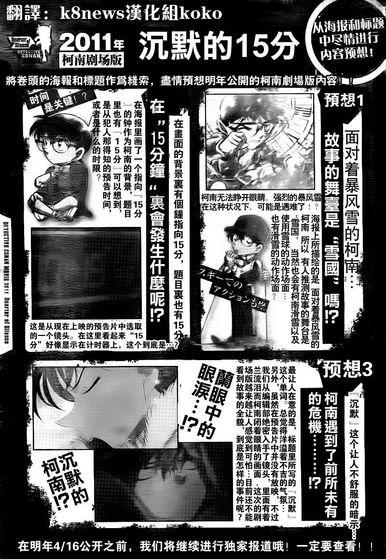 A trailer was already released too.
link

What are your देखा गया on the upcoming movie? Please feel free to say anything! :)

-It sure involves lots of snow, and with the clock on the poster, it'll be about bomb/explosions.
-Quarter does refer to '15'
-And as a ShinRan प्रशंसक at heart, I was like O_O when I saw the स्नोबोर्ड, snowboard scene with Ai holding on to Conan like that. Sigh.