6
Rocky - content of all six films
posted by Nerdbuster2

Rocky Balboa (Sylvester Stallone) is a small-time बॉक्सर who seems to be going nowhere in life, as he works day-in and day-out as a collector for a loan शार्क and fights in sleazy क्लब्स for low-paid reward, to which Rocky is mocked and told that he's nothing but a 'bum', especially द्वारा gym trainer Mickey Goldmill (Burgess Meredith). At the same time, Rocky unsuccessfully courts Adrian Pennino (Talia Shire), a painfully shy woman with an alcoholic brother, Paulie (Burt Young). But when heavyweight champion of the world Apollo Creed (Carl Weathers) chooses Rocky at बिना सोचे समझे as his opponent in a शीर्षक fight, Rocky realizes he now has the chance to prove he is not worthless. With Adrian as his support and Mickey becoming his trainer and manager, Rocky fights for his self-respect.

Soon after proving himself, even with a विभाजित करें, विभक्त करें decision loss to Apollo Creed, Rocky expects the good life to follow. He marries Adrian and begins spending the money he earned from the match. But after he fails at both endorsements and a series of low-wage jobs, Rocky realizes the only way he can survive is to begin boxing again. Creed, on the other hand, faces criticism from प्रशंसकों to overcome the fight. As a result, he taunts Rocky through publicity into a rematch, for which Rocky trains once again with Mickey. In the fifteenth round, Rocky knocks Creed to the ground, falling to the ground himself in the process. Both fighters struggle to get to their feet, but only Rocky is successful. For the first time, Rocky is declared the Heavyweight Champion of the World.

After winning the heavyweight title, Rocky takes advantage of his newfound wealth and fame, appearing in multiple advertisements & टेलीविज़न programs, and relishing his new celebrity. After defending the शीर्षक multiple times, he is prepared to retire, but the No. 1 contender, James "Clubber" Lang (played द्वारा Mr. T), challenges Rocky publicly. Rocky, after dealing with Mickey's दिल attack before the fight, is overpowered द्वारा the stronger, hungrier Lang and is knocked out in the सेकंड round. Mickey passes away after the fight, and old rival Apollo Creed steps in, training Rocky to fight और in Creed's old style (and in his old Los Angeles gym) and use और guile and skill. In the rematch, Rocky outboxes Lang, tiring the stronger fighter out and eventually knocking him out in the third round. After the fight, Apollo calls in his "favor" for training Rocky, which is a one-on-one match between the two of them with no cameras, no media, just man vs. man in the gym. The film ends as they each throw their first punch.

After winning back the शीर्षक from Clubber Lang, Rocky decides to spend some time with his family. However, destiny has some new plans for him which don't allow him to leave the ring. A new fighter from the USSR, Ivan Drago (played द्वारा Dolph Lundgren), has emerged and challenges Rocky to an exhibition match. Apollo fights instead, and the beating he takes from Drago ends with him dying in Rocky's arms, still in the ring, as Drago coldly watches. To avenge Apollo, Rocky challenges Drago to a rematch, which is to be held on क्रिस्मस दिन in Moscow. In a montage replete with symbolism, Rocky is shown training in a remote केबिन in Siberia with the help of Creed's old trainer Duke, his brother-in-law Paulie, and (eventually) Adrian, doing exercises such as chopping wood, lifting rocks, running in the snow, and climbing a mountain filled with snow, while Drago is seen in an ultratechnological training facility running on treadmills, utilizing weightlifting machines, and injecting steroids to boost his strength. During the fight itself, Rocky takes the worst beating of his life, but refuses to fall, eventually winning over the foreign crowd with his display of courage and determination, and he knocks Drago out with सेकंड्स left in the final round.

In the aftermath of his fight with Ivan Drago, Rocky Balboa is diagnosed with brain damage and is forced to retire from the ring. As if that isn't bad enough, the Balboa fortune is all gone due to an unscrupulous accountant. Rocky's family returns to their old neighborhood: Adrian returns to the pet store she used to work at, while, in a subplot, Rocky (Robert) Jr. (played द्वारा Sylvester Stallone's real son) deals with bullying at his school and Rocky re-opens Mickey's old gym. While training other boxers, Rocky meets a young, hungry बॉक्सर named Tommy Gunn (played द्वारा real-life fighter Tommy Morrison) and begins training him which results in a strained relationship with Robert. Unfortunately, as Tommy begins his rise to fame under Rocky's wing, a sleazy fight promoter named George Washington Duke convinces Tommy that Rocky is holding him back, and Tommy throws over Rocky for Duke. After Tommy wins the heavyweight championship, he makes a short speech thanking Duke, and is met with jeers and the familiar chant of "Rocky" from the crowd. Seething from this insult, as well as being called द्वारा publicists as "Rocky's Robot", Tommy decides to seek out his former mentor for a final showdown. Rocky starts to walk away from the public challenge, but Paulie decides to let Tommy have a piece of his mind about how Tommy has treated Rocky – after which Tommy punches Paulie. Rocky then challenges Tommy outside. The two proceed in a violent bare-knuckle सड़क, स्ट्रीट brawl, which Rocky wins. Rocky then proceeds to पंच Duke for being harassed द्वारा him. In the end, Rocky and Robert reconcile as they run up the steps as father and son.

In Rocky Balboa, sixteen years have passed since his final fight with his former protégé, Tommy "The Machine" Gunn. Long retired Rocky Balboa still staggers around an ever-changing world; his son is grown and distant, Paulie is working back at the meat plant, and Rocky's wife Adrian has died. Rocky has opened a restaurant, named after his wife, which he stocks with mementos of his prime as he tells his old fight stories to the customers. But when a computer simulated fight on ESPN depicting a bout between a young Rocky Balboa and the current champion, Mason Dixon (Antonio Tarver) reignites interest in the faded boxer, Rocky discovers he has not लॉस्ट his fighting spirit and considers an opportunity to prove himself in the ring again. Rocky does a great job fighting, and almost wins but loses to a विभाजित करें, विभक्त करें decision just like the first movie. Rocky is last seen visiting his wife's grave saying "Yo Adrian, we did it".
LoveSterlingB, onemoresoul and 4 others like this 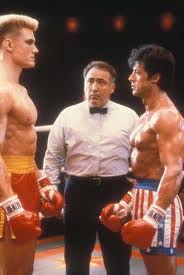 6
Rocky and Drago
added by Nerdbuster2 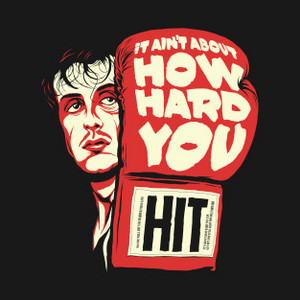 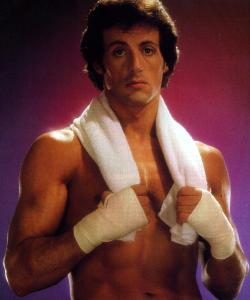 1
Rocky and Adrian
added by AcidBanter 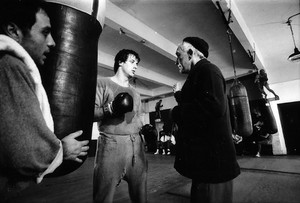 Rocky and Mickey
added by boytoy_84 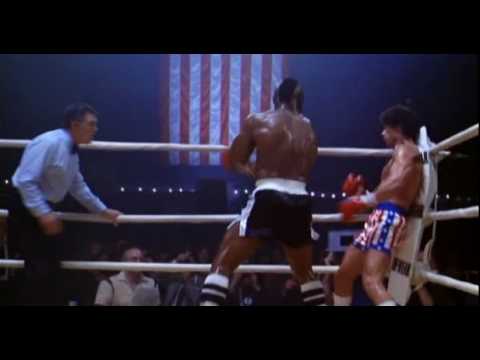 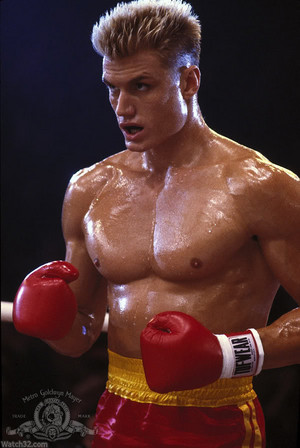 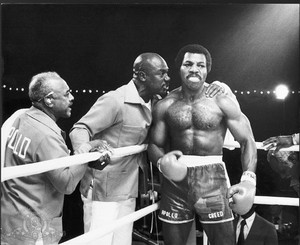