Not an घंटा after the battle of emperorland ended, Soren, Digger, Gylfie, Kowalski and Pat arrived at the Great Ga’Hoole tree. “All right, looks like they have been attacking for some time.” Kowalski said. “Okay, Soren and I are going to go into the पेड़ to see if anybody is left here.”

Soren and Pat soon arrived at Soren’s hallow, but nobody was in his hallow, except for Mrs. Plithiver. She was called Mrs. P द्वारा Soren and was his family’s nest made snake. “Mrs. P, It’s me Soren.” “Soren! It’s so good to hear you.” She is a blind snake, so she uses her senses to feel her surroundings. “Who’s your companion?” “Well, he’s…” Mrs. P cut him off right there. “Let me figure it out. अडेल Penguin, who’s fought in one battle in this glaux (owl god) forsaken war, and sang about an घंटा ago.” “Wow! That’s right. I’m Pat, nice to meet आप Mrs. P.” “We don’t have the time for that! They took Blythe, घंटी, बेल and Bash!” “Who took the three b’s?” “The Striga, Nyra, and some डॉल्फिन sounding creature.” “Blowhole! They are trying to moonblink them! I know they are! I just know it!” Soren exclaimed. “Calm down, Soren. We are going to save Pellimore and the 3 B’s. I have a plan.” Pat said.

Meanwhile, Blowhole, the Striga and Nyra were indeed trying to moonblink the owlets and their mother, but to no avail. “How long does it take to moonblink them?” Blowhole asked, sounding annoyed. “It takes a full moon cycle.” The Striga said. “I’m guessing about a month.” “Yes.”

The Guardians, Soren, Gylfie, Digger, and Pat were getting ready for the biggest battle of their lives. “Okay, let’s go save the innocent owls!” The battle was starting. Pat was being attacked द्वारा three different owls. “Soren, I need your help!” “Hold on!” Soren said. Soren and Digger doubled back, and took out the three pure ones. “Okay, I think we need some inspiration.”
(Africa द्वारा TOTO)
I hear the drums echoing tonight
But she hears only whispers of some quiet conversation
She's coming in the 12:30 flight
The moonlit wings reflect the stars that guide me towards salvation

I stopped an old man along the way
Hoping to find some old forgotten words या ancient melodies
He turned to me as if to say
"Hurry boy, it's waiting there for you!"

Hurry boy, she's waiting there for you

They had found the three b’s, but their mother was still missing. “Soren, watch out! It’s Pellimore and she’s moonblinked!” Soren pleaded with his mate to help turn from the moonblinking. “Pelli, it’s me, Soren, Your mate and your best friend.” “Soren, it’s awful, they moonblinked me. I must look awful.” “You look fine, Honey! Come on, we need to get to Paris!” Soren said. “I don’t think so. आप aren’t going anywhere!” The Striga proclaimed. “Let’s fight then, just me and you.” Pat said. Pat and the Striga started the fight. Pat hit him square in the face with his battle claws, fitted for पेंगुइन use. The Striga would then hit him in the head with a branch. “Soren, give me that पेड़ branch!” Pat then hit the Striga with that branch. “Okay, it’s time to end your life!” The Striga then lunged for Pat with his Fireclaws, but missed. Pat hit him with his own claws in Striga’s heart, killing him instantly. “Now, don’t screw around with me Blowhole, one of your two partners in crime are no more. Your little insurrection is coming to an end. If आप come easily, we won’t have to end this with death.” Pat said. “No, I not giving up, penguuuin. I shall rule the Earth NAAAAAAAAAAA!” “We need to get to Paris!” Pat exclaimed.

Disclaimer: Happy Feet, Happy Feet Two and Legend of the Guardians belong to Warner Brothers and Village Roadshow Pictures; Penguins of Madagascar belongs to Nickelodeon and DreamWorks Pictures; Sly Cooper belongs to Sanzaru Games, Sucker Punch, and Sony Computer Entertainment; Guardians of Ga’Hoole belongs to Scholastic and Kathryn Lasky; Africa belongs to TOTO.
6
Mad scientist (part 2)
posted by chaos-ice
Skipper stood up and went to Private. “Wake up soldier” He slaps Private on the face and Private is now conscious. “Boys get up on your feet. We got some work to do.” The penguins slide their way outside and went to the HQ.

There they saw Kowalski holding his uncompleted Life Generating Device. They tried to stop him from getting away. While the others are fighting, Skipper noticed a piece of paper on the ground; it’s the same paper Kowalski is holding a while ago. He picked up the paper and read it. He was shocked when he read the content of the paper; it’s a letter from Dr. Blowhole...
continue reading...
3
The Great Golden Easter Egg शरारत
posted by Colonelpenguin
For this one the characters will be me,Lilly,kowalski,Scarlet,Rico,Private,King Julian, Jeremy,And Skipper.

A दिन Before Easter....
A दिन before Easter everyone was so happy about Easter. We where so happy we throw a celebration and an Easter egg hunt.
Me:Okay who every finds this egg first will receive a life time supple of chocolate.
Kowalski:Will आप know who is going to win because he has a brain and the others don't!
Jeremy:I have a brain!
EveryBody:No आप don't!
Jeremy:fine!
Skipper:I'm the best seeker there is!
Private:oh pish posh!
Rico:I'm going to win this thing Baby!
Kowalski:Your not gonna...
continue reading...
2
The Magical Smart Tonic Pt 2
posted by Cherpeng
As continued, Kowalski found a magical tonic that makes people smart and wants to drink it but Skipper wont allow him to drink some ,since he might get parilized.The वोट्स are clear that I should continue, enjoy! :D

Kowalski sat on his बिस्तर in depress and mumbled "It's just not fair." Over and over to himself.Skipper looked at Kowalski and then stared down on the floor. Private walked cautionary near Kowalski and कहा "When Skipper कहा आप can't drink it, it really was for your own good." soothing Kowalski a bit,"I know but he wont even allow me to look at it या read who it was from."Kowalski...
continue reading...
What happened? (Ch.1- Pg. 1)
posted by Manfred_Johnson
(Random story we come up with)
"I can't take listening any और to this. Come on boys we got better things then listen to this lemur." Skipper कहा has him and his team begain to waddle out of the gift shop.
"Fine then leave! I the King do not care if आप leave. So go one." Julain कहा in reply practically दिखा रहा है them out. All the others जानवर just stared at them until the ऊद, ओटर, ऊदबिलाव Marlene leaned against a stuffed animal hippo on the shelf opening a secret door based right in the middle of the खरीडिए on the ground. They all looked at it with amazement wondering how it got there and were does it...
continue reading...
2
Marski-Secrets Part 1
posted by butterfly_song 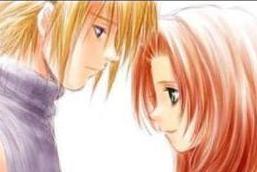 love is forbidden bitterness...
Meh. I feel like लेखन one. Don't hurt me!(This is an odd human ऐनीमे version which please don't judge me. I was bored...Also. I tweaked a few things. You'll notice (^^) enjoy I guess (´ﾍ｀；)PS: I don't know what really anyone does in America. Since I live in जापान (´д｀))
~~~~~~~~~~~~~~~~~~~~~~~~~~~~~~~~~~~~~~~~~~~~~~~~~
"KOWALSKI!" Skipper busted into Kowalski's room. where Kowalski slept. Skipper ran over and slapped him upside the head. but it was a just a projector.
"Crap! Where is he?"
----
"I had an er," Kowalski walked along side of Marlene "an extatic time with you... It was..."...
continue reading...
2
Polar Opposites
posted by Penguin11
My first ever Kico fic! :D
-----------------------------------
I sit silently watching Kowalski from afar.
Watching the पेंगुइन create is my only redemption from the empty void I call life.
And I sit here, taking in Kowalski with all of my senses.
Sound? His voice melts my soul and sends tingles down my spine every time he addresses my name.
Touch? He was softer than the tiniest down feather of a newly hatched goose.
The touch of Kowalski sends me wild.
Sight? Eyes like the vast ocean, and a black and white body like that of the homeland Antarctica.
Smell? A touch of salmon, some phosphoric acid, salt...
continue reading...
6
Pairing probabilities
posted by Tripenguinman
So, what're the chances of our प्रिय pairings? No matter which is most loved, the possiblity is always important but a crusher. For the sake of the fans, I have put together the likliness of these three pairings: Skilene (Skipper/Marlene), Marski (Kowalski/Marlene), and the new Mico (Rico/Marlene).

Skilene- Though the relationship is shown budding on the TV show, the two are hard to get together. If आप look, Skipper shows the most attention and affection to Marlene but comparing their personalities, they just aren't that compatiable. Marlene: Strong-willed, playful, selfless, and independent....
continue reading...
1
Phantom of the Opera Part 9
posted by KowalskiTheLich
And so King Julien attempted to organize a late night party. He did manage to throw one on Thursday night, but the party was such a bust (the room was very cramped, there was nothing to eat and King Julien insisted that everyone form a conga line even after several जानवर made it clear they did not want to). The अगला night, Julien announced that he was going to be throwing a सेकंड party and the सेकंड he did so nearly all of the जानवर that were listening walked away, mumbling about how they would write notes to themselves reminding them not to go. Julien, frantically trying to think of...
continue reading...
1
Phantom of the Opera Part 8
posted by KowalskiTheLich
The morning after the small funeral, everyone was particularly tense. Trying to prevent themselves from crying about Kowalski anymore, they resorted to beating the stuffing out of one of their punching bags (literally) and doing a bunch of grueling exercises without a break. Skipper was convinced that the extra work would keep their minds off of Kowalski but it actually did the opposite: everyone was thinking of Kowalski to keep their minds off of the constant soreness and pain they were feeling from doing all of the work. Eventually, Skipper acknowledged that fact that his idea was not working...
continue reading... 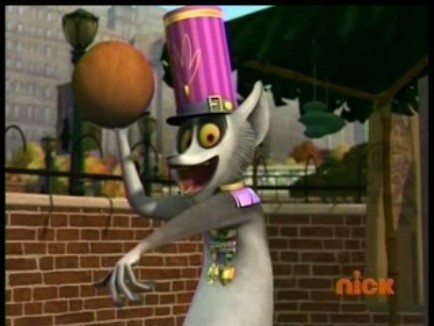 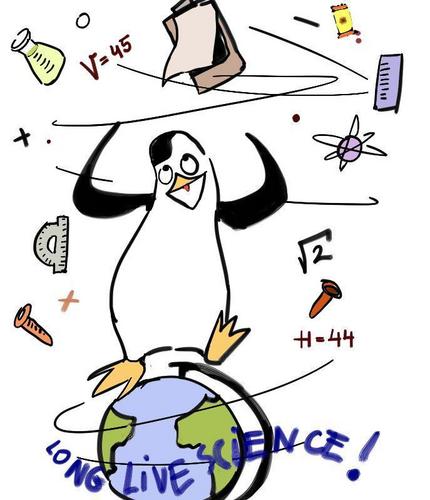 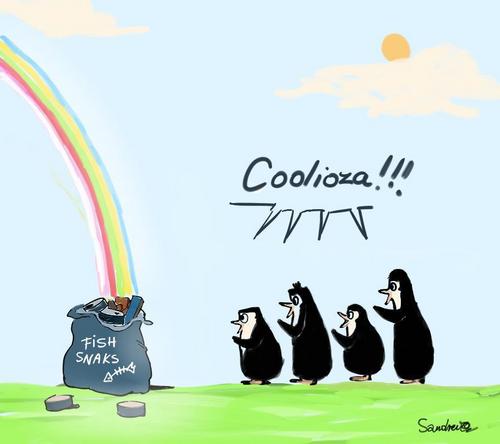 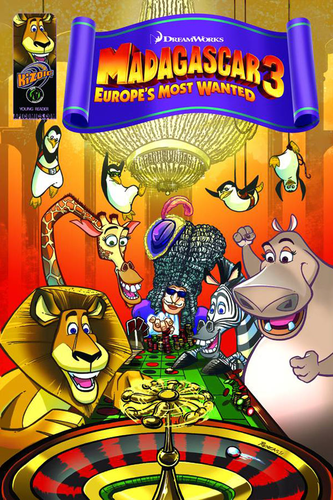 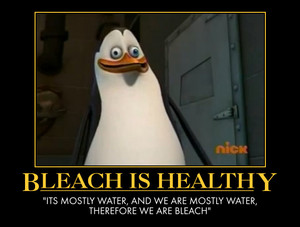 "The Penguins of Madagascar"

Scene I: Red's Underground Base

(Red is muttering to himself, dusting)

(Dusts off his control panel)

(Camera whips around to Fred)

Fred: Hello. आप really need to get a mattress for the entrance. That fall hurt.

(Red drops the feather duster and turns around) 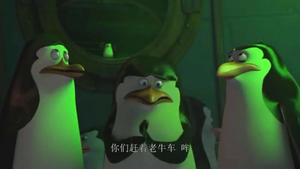 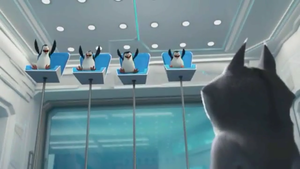 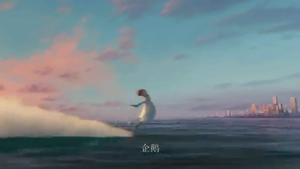 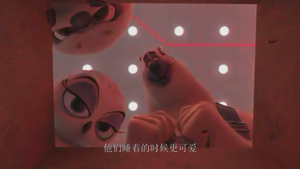