1
Wolverine gives finger.
posted by ladypink
Ok, for some unknown reason, especially for a girl who considers the word "shit" a pretty big swear, I प्यार it when wolverine gives his whoever he's mad at the finger with his claw. So far I've seen it in two movies: X-men and X-men origions. And every time I cant help but grin. It plain steel attitude there. Hugh Jackman is a master of facial expresion and makes the whole thin perfect. Who knew that such a fragment of a scene would be one of my favorites. I wanted to find an image to add to this little peace of mine but alas, one has not been found. So use the imagination!
2
Real Steel
posted by WolverIneGIrl
On saturday I went to watch Real Steel, and I was very excited. I loved the movie, it as amazing!!! It was like Rocky but better. This is द्वारा far the best movie द्वारा Hugh Jackman. The kid who plays max (Dakota Goyo) was spactacular, he is the new Leonardo DiCaprio. आप NEED TO SEE THIS MOVIE!!! Not only do आप need to see this movie आप need to शामिल होइए the प्रशंसक club. I promise आप that आप will not be disapointed द्वारा this movie. My प्रिय part is when Hugh kisses Evangeline Lilly (just saying). And it wasn't just an action movie, it was actually pretty funny. Hugh and Dakota Goyo's sarciasm was really funny they were meant to be in this movie together. I am pretty sure I am going to see this movie again!
Susan william's journey
posted by Dambuster
Hello Mr Jackman
I just wanted to tell आप about my partner Susan Williams who went into Liverpool दिल and chest hospital to have a life saving operation last January, the amazing surgeon did save her but because of the nature of the operation Susan wont be able to walk anymore
The reason why im लेखन to आप is because before she had her op she कहा .. as long as Hugh Jackman is there when i wake up ill be happy so her son in law Martin drafted a couple of pictures of आप with the words come on Susan and those pictures have been taken with her to all the wards and hospitals Sue has been in, we were going to watch the greatest showman but Susan got called up, anyway i hope आप get the chance to read this and all the best to you
8
10 Reasons to why I प्यार Hugh!
posted by McDreamyluva 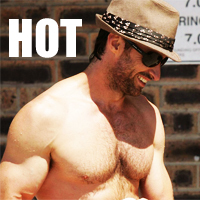 
10. He's TALL!! *okay this may be one of the lamest reasons that anyone can come up with, but I have a thing for tall guys~*

9. He can sing and dance!! It's just amazing to see a man with THAT kind of body and THAT good looking have enough guts to shake his booty in front of many people while singing~ I mean George Clooney would never do that. so what I'm saying is he's very bloody Talented!!

8. He actually got a brain unlike most actors out there who are just plain...dumb (no offense to anyone, this is just a generalisation) ....
continue reading...
4
ह्यू जैकमैन
posted by Blossom71
Hugh Jackman!Where to begin.He is so cool.Not only is he sexy,he is just so fun.I would give anything to be in a हटाइए with him.He is so easy going.He also is a talented actor.From a slayer,and also a sexy werewolf in वैन, वान helsing to doing magic,and off braodway he can do it all.I think he did great as wolvarine,the X-men फिल्में are awesome.I hope to see और of this man in the future.I would like to see him paired with Kate Winslet maybe in a romantic comedy.I think they would do great together.What do आप think the फिल्में Hugh does?What ones do आप like best?
2
Taylor Lautner replacing wolverine?????!!!!!!
posted by jjbbliker
When i googled hugh jackman i found out that they might cast taylor lautner as wolverine instead of hugh jackman! hugh jackman doesnt have a problem with it because he is so nice, but if lautner does play wolverine then he will kill it. no one is going to watch a hairless wolverine!!!!! and wolverine is supposed to be a man! not a kid like lautner. i wouldnt have a problem if he played wolverine when young and then hugh comes in when he grows up या whatever, but they cant replace hugh! so if आप want hugh to stay wolverine आप have to coment that it is a crisis, and whenever आप hear about it say that it sucks या whatever. i am not going to be a प्रशंसक of wolverine if lautner replaced the real wolverine, and alot of guys will stop too because of that. no guy wants to see lautner playing his hero!
2
Hugh Jackman - A real steel!
posted by Rituparno_Ghosh
Are आप Hugh Jackman fan? Like his work in 'Real Steel'?

So Real Steel wants to be a father-son bonding movie along with the whole robots beating each other up thing. Since Jackman’s character drives a big truck and is trying to get acquainted with his son, I was reminded of the father-son bonding/arm wrestling movie Over the Top.

Jackman, an actor I usually like, should stick to his cool Australian accent. He talks with some strange accent in this film that makes him sound like he should be in a 1930s Chicago gangster movie. Why not make his character an Australian immigrant and call it a day.

This link allows the user to see a stream of content that includes videos, images, tweets, फेसबुक अपडेट्स for Hugh Jackman and his work in almost every movie instantly - link
5
Why I प्यार Hugh Jackman!
posted by heidigho3
Wat up guys?! These are some reasons why I प्यार Hugh jackman.

1: He is a family man and stays in a relationship.

3: He has time to hang out with his kids whitch I think is such a great thing!

6: Gets along with people well.

9: He does charity.
And number 10: He's inspired me to become an actress and I thank him for that and I wish one दिन to meet my Hero. Thanks for पढ़ना my ten things why I प्यार Hugh Jackman. See ya!
You Might Also Like...