Characters in Inheritance Cycle - Part 3: Brisingr
posted by ilovereading
This is the last in series of three articles. Like आप probably got from the title, it's a सूची of characters. :) But beware! It include SPOILERS! 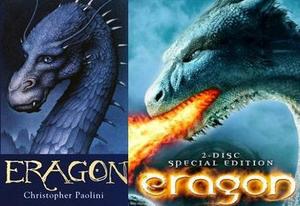 This लेख is to point out the differences between the Book एरागोन and the Film Eragon, which was a great disappointment to many fans, including me. So here we go, my information is from the InheriWiki.

Book- Zar'roc has a सोना pommel with...
continue reading...
2
Main events/ name meanings
posted by kelseyjayne25
Here are some name meanings I came up with>

-based on combinations of names in naming books

And here are the important event in the first book>

Characters that actualy appear:
Eragon - 16 years, Rider
Saphira - Eragon's dragon
Angela - witch and herbalist
Arya - an elf that एरागोन saved, about a century old
Jörmundur - Ajihad's right hand
Nasuada - Ajihad's doughter and क्वीन of Varden after her father's death
Murtagh - Morzan's son, latter becomes Rider
Orik - dwarf and Eragon's friend
Jarsha - a young boy that shows एरागोन the way to the Council...
continue reading...
1
Castor, Eighth of the Forsworn
posted by ilovereading
"When the ड्रॅगन्स realized that thirteen of them own had betrayed them - that those thirteen were helping Galbatorix to eradicate the rest of their race and that it was unlikely anyone could stop their rampage - the ड्रॅगन्स grew so angry, every dragon not of the Forsworn combined their strenght and wrought one of their inexplicable pieces of magic. Together, they stripped the thirteen of their names. [/.../] And as a result, the thirteen were reduced to little और that animals. No longer could they say "I like this" या "I dislike that" या "I have green scales," for to say that would be to...
continue reading...
My Forecasts for Book 4
posted by ilovereading
I was just wondering about fourth and last book of Inheritance Cycle, what will happen, who will end up with who... Here are some conclusions and potencial spoilers (lol, only Paolini knows if they are). टिप्पणी दे about what आप think, and we will see how much of it will come true!

THE THIRD RIDER
I have this wierd feeling it`s going to be Arya, and that is for two reasons:
1.Colour:
The last dragon is green. Of what colour are Ayra`s eyes? Green. One of her relatives has a rider`s sword. Of what colour? Green.
And Paolini has this something for the colour of ड्रॅगन्स and swords...
Besides, none of...
continue reading...
Characters in Inheritance Cycle - Part 1: एरागोन
posted by ilovereading
This is the first लेख in series of (planed) three. I intend to write down every character that was ever mentioned द्वारा name and maybe add a physical discritipion and some background, so if आप haven't read the book and if आप don't want to find out yet, don't read this, since it probably includes some SPOILERS!
The main point of this is to find all characters that appear in all three books, so that we may guess who the third Raider is!
So lets do this! *incredibly optimistic face*

Characters that actualy appear:
Arya - an elf, black hair, dark green eyes
Eragon - 15 years, brown eyes
Sloan - butcher,...
continue reading...
discovery part 1
posted by mikejoe123
I woke up to the thunder outside as i woke up, i could hear my brother Jake, talking to my father. "Do आप think he will find out about it?" He asked "no" replied my dad i walked in as if i didn't even hear them. "Hey guys whats up?" "Oh nothing." My dad gave him a nudge. "Oh um मक्खी, ड्रैक, ड्रेक we were wondering if आप want to go hunting later?" Sure why not. "Great he says." So as we were in the woods i noticed a small egg it looked as if it were a pigeons egg. But it was different so he thought he would raise a bird, after all he had always wanted a pet. "Hey मक्खी, ड्रैक, ड्रेक lets get back घर its not too long before dinner. "Alright as they were going he ran into Emily. " oh hi drake". She says "hi Emily." i was just gonna ask if maybe आप wanted to get something to eat later?" Uh sure." As they were going he noticed something in the air he wondered if it could be a shooting तारा, स्टार because it was way to big to be a bird.
2
Breaking Free Of Galbatorix's Mindslavery (For Dummies)
posted by ilovereading
Dedicated to all brainwashed servants, mindless zombies and Murtaghs out there.

Why wait for एरागोन to save you? द्वारा fallowing these five simple steps, आप should be able to free yourself of Galbatorix's mind control in no time.

1. Hold nothing dear to you.
Otherwise, Galbatorix is bound to use it against you. Familiy, friends, your life,... if आप value any of these आप are a perfect target for evil rulers. If आप don't... well आप won't hold any of them for long, but आप won't be a mind slave either.

2.Change your true name at least once per week.
It's like changing the location of your hidden...
continue reading...
2
What I think is going to happen in the last book
posted by DragonDandel
एरागोन was tired of fighting. His arms were heavy, and his mind was confused द्वारा fatigue. But he knew he couldn’t stop fighting now. The elfmagicans were tired, he was tired, Saphira was tired, but so were Thorn and Murthag too. And एरागोन still had the power from Oromis’ sword which he had transferred into Brisingr.
Thorn attacked again. Whit his enormous jaws open he launched himself downwards against Saphiras back. But Saphira was to fast. With an easy हटाइए she got out of Thorns path, and Thorn passed द्वारा her with direction to the ground.
Eragon reacted on instinct. <Follow after him...
continue reading...
You Might Also Like...

Christopher Egan
7 things एरागोन could या SHOULD do in his life
posted by ilovereading
Ok, here is a सूची of things that, द्वारा my opinion, would make Eragon`s life much easier.


1.Swear he won`t swear anything to Galbatorix in ancient language. That way, the evil king could break through दीवार with his head and still not be able to control Eragon.
And ask Murtagh to do the same (= important part).

2.Stop falling for elf chichs, 70 years (or something like that) older then himself, and get a तारीख, दिनांक (or life).

3.Quit researcing his family tree. Every normal person would. अगला thing will probably be that Galbatorix is his grandfather and Elva his sister.