For everything turned false,
A little और turns true.
The daily birds in the trees
Sing forever.

Why does my head feel like a horse has trodden on it? Arthur groans and turns, feeling the soft fallen leaves of the forest floor under his hands. He tries to open his eyes, but the brightness of the sun pierces his head like a blade, and he slams them shut once again with a groan.
What happened? Where is my horse? Merlin? Sir Leon, the knights? The princess?
He tries to sit up, but again the pain in his head prevents him, and he slumps back down, trying to think.
Something spooked the horses. The party was scattered; I was thrown. He rolls onto his side, curling his body up. I haven’t been thrown from a horse since I was nine.
Open your damn eyes and try to see where आप are.
Gingerly, he pries his eyes open, raising his hand to shield them from the sunshine. A small clearing. Get into the shade.
Grunting with the effort and the pain in his head, he crawls on his belly about two meters to the base of a tree, where he slumps down again, panting.
He raises his hand to his head, feeling carefully. When he withdraws his hand, there is blood on it.
Fantastic. Why isn’t anyone looking for me? His last thought before he loses consciousness again.

Arthur feels something cool on his forehead, something soft pillowing his head. They found me; I’m in my bed, he thinks, grasping with his hands for the soft blankets of his bed. His fingers grasp the material and he pulls it, trying to cover himself, to snuggle in, but the sheet will not come.
He gropes with his other hand, finding only leaves, twigs, and dirt. I’m still in the forest, he realizes. But what fabric is this?
He opens his eyes as much as he can, but all he can see is a blur of yellows and browns.
“Shh, Arthur, just rest.”
I must be delirious. That is Guinevere’s voice.
He moans and shifts his position slightly, and his arm bumps something hard. That felt suspiciously like a knee.
The cool something on his forehead moves, stroking it, brushing the sweaty hair aside before moving around to the wound on the side, where he can feel nimble fingers lift something pressed against the side of his head before replacing it, pressing gently but firmly.
“The bleeding has slowed,” he hears her voice whisper, but it is not speaking to him.
He turns his head, feeling the material he had clutched at earlier beneath his cheek, something warm and soft beneath that.
I really did hit my head good. This feels like a lap. It feels like my head is in Guinevere’s lap.
If this is what being unconscious is like, I’ll take it.
Her cool hand returns to his forehead, soothing. He hears gentle humming and drifts away again.

“Arthur!”
“Sire!”
Voices in the distance, coming closer, stir him once again. He opens his mouth to answer, but no sound comes.
He feels his head lifted, gently, with supreme care, and set down on what must be his cape folded into a makeshift pillow.
A pair of soft lips, warm and familiar, press his forehead, his cheek, his lips.
“I प्यार you, Arthur, always. Always.” Guinevere’s soft whisper torments him in this dream once again.
If she was ever here, she is gone now. He imagines he hears the gentle whisper of her skirts against the leaf litter, her soft footfall as she steals away.
“Here! I found him!” Merlin cries, crashing through the underbrush towards him.
“Arthur?” He crouches अगला to the king, turning his head to inspect the damage.
Someone has tended this wound, Merlin notes, furrowing his brows at the strange गुलाबी dressing wrapped around his head.
His eyes drift to the तकिया under Arthur’s head. It’s the same color. Strangely familiar…
“Guinevere,” Arthur moans quietly.
He’s लॉस्ट it. “No, it’s Merlin, Sire. Come on, we need to get आप back to Camelot.”
“She was here,” he gasps. “Guinevere was here.”
“As आप say,” Merlin humors him as Leon and Percival lift him and Percival slings him over his shoulder.
Merlin crouches down to retrieve Arthur’s crossbow and picks up the bundle of material that was under Arthur’s head and lifts it.
It is one of Guinevere’s dresses.

Song 11: link
KshMcKenzie, mrshafiz1 and 1 other like this
Nasty_Nat He really did hurt his head. He sees Gwen everywhere. Shee is truly in his blood.
fdarcy What can I say, this was just beautiful.
6
Songs to Dance - 8 - I wouldn't die
posted by kbrand5333
Song 7: link


I wouldn't die without love,
But I'd desert my house and land.
I would be, for a while,
Something simple like grass,
And later on be woods.

“Gwen!” an urgent voice whispers in the dark dank of the dungeons. “Gwen, wake up!”
Guinevere turns over and sits up on the filthy straw mat. Her eyes दिखाना no signs of sleep, only weeping. They are swollen and rimmed with red. “Merlin?” she blinks. She has spent the evening crying and crying and has run out of tears an घंटा ago.
Merlin swings the cell door open. “Come...
continue reading...
5
Songs to Dance - 7 - Beware
posted by kbrand5333
Song 6: link


Beware of the thought
That carries आप to jail,
Where iron is the captive of the bars,
And water complains in its glass,
And be careful of the prisoner’s song.
It has the singer written in.


For me, there is no song
Unless I sing it,
And yet I प्यार you,
And make music
Which I cannot hear.

I slept on the तालिका, टेबल again. There is a crick in my neck, threatening to become permanent from my head being bent over the तालिका, टेबल each night rather than on my pillow.
But I cannot sleep in that bed. Not knowing that she is supposed to be there with me. In my arms. My body warming hers. Loving hers. Worshipping hers.
I miss her so much.
The sting of her betrayal is nothing compared to the burning gash...
continue reading...
4
One Thousand Tomorrows - Part 9
posted by kbrand5333
Part 8: link

Sorry about the delay, there was a slight hiccup in the proceedings. But we're back on track now!

London, 1977
kbrand5333
A/N: If आप are unaware, “fag” is British slang for a cigarette. I would never use the crass American version.

I hope those ruffians aren’t loitering around again. I hate walking past them, Gwen thinks as she walks down the street, on her way घर from some Saturday morning shopping. Her bag in her arms with some groceries from the market; she rounds the corner and surveys the सड़क, स्ट्रीट ahead of her.

“Gwen, can आप help me a moment, please?” Merlin sticks his head out of the doors leading to Arthur’s chambers, and, having spotted her passing, calls.
“Of course, Merlin, what do आप need?” Gwen asks, turning towards the doors.
“Arthur wanted me to change his drapes,” he sighs, walking ahead of her.
“You...
continue reading... 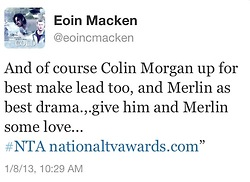 And Eoin Chimes In...Oh Yes, the Boys They Are Plotting लोल
added by EPaws
Source: twitter 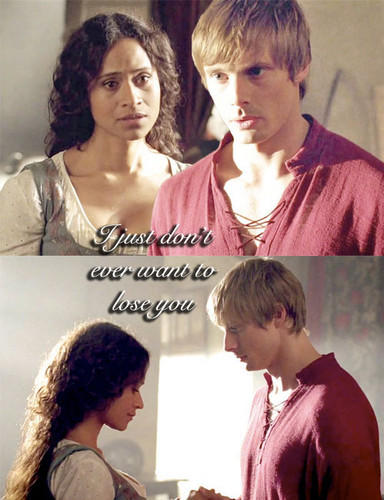 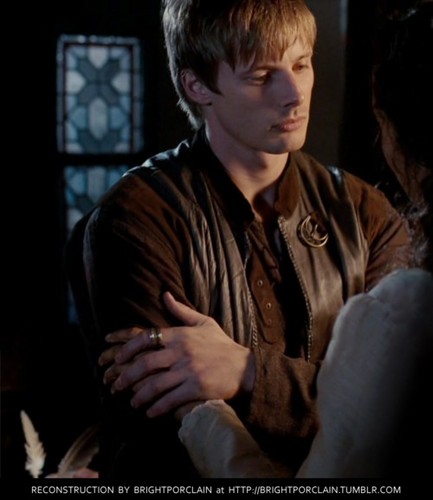 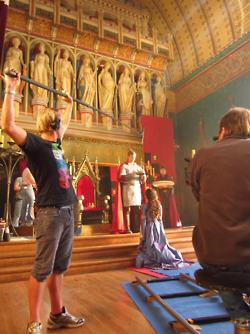 1
Our OTP and Their Perfect Faces (2)
added by EPaws
Source: Brightporclain 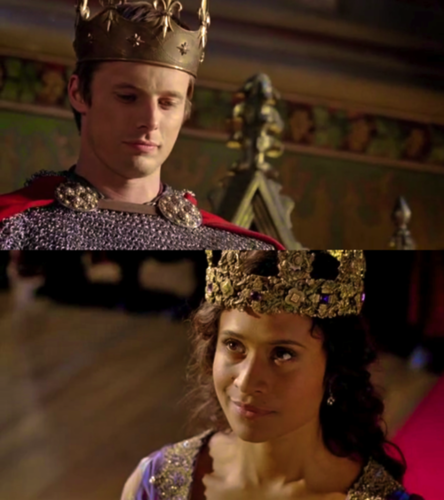 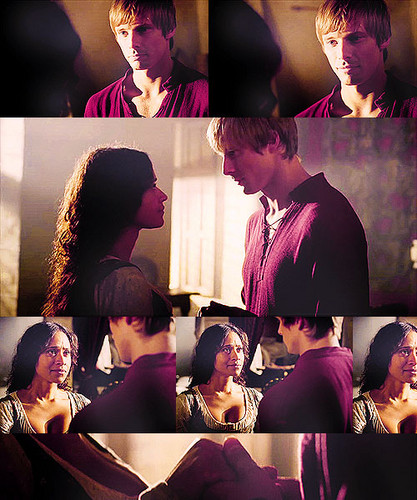 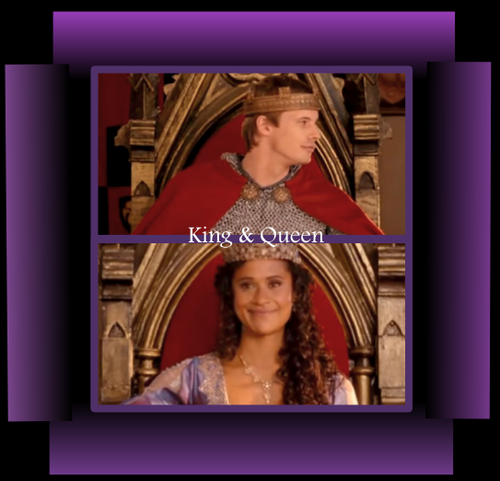 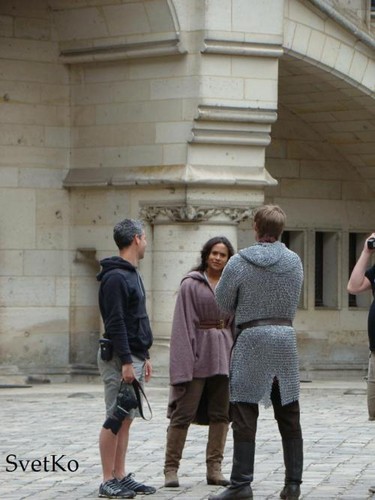